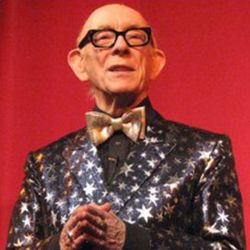 He was a direct descendant of the 13th century Scottish leader portrayed by Mel Gibson in "Braveheart", as well as of Richard Wallace, who was responsible for the famous Wallace fountains that can be seen in many places in Paris, France.

After serving his country, he worked for many magic stores in London, including Harry Stanley's famous Unique Magic Studio, and was manager of the magic department at Hamleys Toy Store in Regent Street, London.

Ali Bongo was one of the greatest creators of his time. Known for his genius, Bongo was a kind of mad scientist who developed tricks and illusions, and solved many magical problems.

In 1965, Bongo made his debut on British television in "The Good Old Days".

Ali Bongo worked as a magic consultant for many magic venues and TV shows for famous magicians, including David Nixon, David Copperfield and Paul Daniels.

He also inspired writer David Renwick to create a character who was a magician's assistant and amateur sleuth in the "Jonathan Creek" series.

He participated in many television specials: "Doctor Who", and the cult series of the 70s, "Ace of Wands".

He also wrote many books on magic, in which he described many of his own creations, illustrated with his own distinctive style.

He took the name Ali Bongo from a character he had created for a youth club pantomime.

He created his "Shriek of Araby" character with an oriental costume (dress, golden slippers, horn-rimmed glasses and a headdress incorporating both the fez and turban).

Originally, his character spoke, but "someone suggested that I do it silently so I could work anywhere, and that was the luckiest thing in my life," he recalled, as it allowed him to travel and perform all over the world. His character was based on the silent actors of the past, with some of the characteristics of Oliver Hardy and others, but the "Arabian Nights" costume came from the 1934 movie "Chu Chin Chow"."

He became one of the most popular stage magicians in the 60s.

In 1960, he joined the prestigious Magic Circle and two years later was elected to membership of the Inner Magic Circle. He received the Carlton Comedy Award in 1983 and the David Berglas Award in 1991.

He served two terms as vice-president of the Magic Circle before being elected president on September 8, 2008.

Ali Bongo was one of the pillars of the "Fruits d'Or de Montaneuf", the magic brotherhood created by Claude Rix and Fred Kaps in 1973.

In February 2009, Bongo collapsed while lecturing in Paris. He was taken to the hospital where he was diagnosed with having suffered a stroke.

He died shortly thereafter from complications of pneumonia on March 8 in the London Hospital in the United Kingdom. His burial ceremony took place on March 27, 2009.