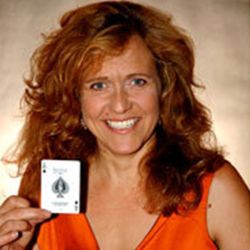 Lisa Menna is an American magician, born on July 23, 1964.
For her fifth birthday she attended a magic show, which gave her the spark. Then she received her first magic set for Christmas.
She started performing magic at the age of eleven. After six years and one thousand performances, she saw Charles Greene III perform and he was her first magic teacher. Before him, she had learned on her own from books in the public library.
She was later influenced and advised by various magicians: Johnny Fox, Paul Gertner, Gaëtan Bloom, Ricky Jay...
At the age of eighteen, she already had two thousand performances to her credit, both nationally and internationally!
Magic helped her pay for her studies and she obtained a degree in science and psychology.
She has done children's shows, close-up magic, stage magic, as well as stand-up magic for trade shows.
She has performed at the New York Magic Symposium, at F.F.F.F., and the Magic Castle in Los Angeles. She has appeared on Juan Tamariz's show Chantatachán. She lectured and performed at FISM at The Hague (1988), at Dresden (1997) and at Quebec (2022).

She has worked extensively internationally, in some forty countries: Japan, Colombia, Italy, Thailand, Spain... performing her shows in four languages.

She has achieved worldwide fame and success as a trade show magician for brands such as Apple, American Express and Intel. She even received the award of "Number One Corporate Magician in the World" at an international trade event where twenty-six of the best specialists performed.

She is now very much involved in social change on the streets as an activist with the « Cause to Wonder » association which gives theatrical performances. She uses magic and curiosity to present new ideas that help health organisations and defend human rights.