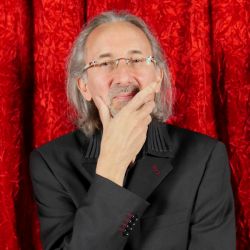 At the age of 15, thanks to his father, a passionate amateur magician, he met Dominique Duvivier, with whom he took regular classes.

Thus magic, and in particular coin magic, gradually became a passion and soon a profession, since he began to work in the Double Fond theater-cafe.

This mythical place allowed him to progress in different disciplines: magic from table to table, shows for adults, shows for children, and creativity. He had regular work sessions where Dominique Duvivier participated, but also magicians passing through Paris such as Michael Weber, John Carney and many others...

At the same time, he increasingly developed his taste for passing on his knowledge, and his desire to teach: he gave courses, specialized in magic workshops for children and teenagers, then became one of the main instructors for the teaching team at the Double Fond Magic School (the professional training organization that provides training for magicians, the first and only one currently recognized by the State, at Diploma level).

Another passion: music! Practicing electro-acoustic guitar, piano and cello, he loves above all to compose. He has published several of his works (CD, DVD...) and some of them are present in Dominique Duvivier's cult videos: "Card magic 2000".